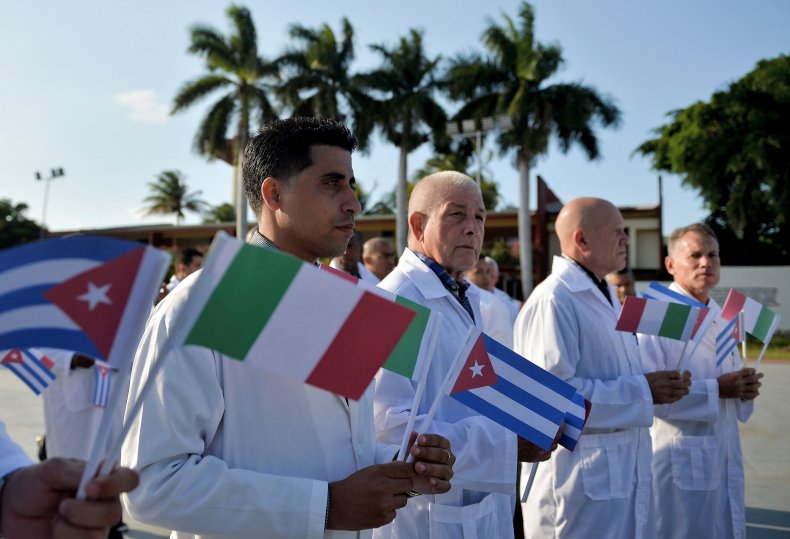 Cuba has mobilized its medical corps around the world to distribute a new “wonder drug” that officials there say is capable of treating the new coronavirus despite the United States’ strict sanctions that continue to pressure the communist-run island.

The drug, called Interferon Alpha-2B Recombinant (IFNrec), is jointly developed by scientists from Cuba and China, where the coronavirus COVID-19 disease outbreak first emerged late last year. Already active in China since January, the Cuban Medical Brigades began deploying to dozens of nations, providing personnel and products such as its new anti-viral drug to battle the disease that has exceeded 400,000 confirmed cases across the globe. As of Tuesday, over 100,000 people have recovered from the infection and more than 18,000 have died.

Cuba first used advanced interferon techniques to treat dengue fever in the 1980s and later found success in using it to combat HIV, human papillomavirus, Hepatitis B, Hepatitis C and other diseases. The use of Interferon Alpha-2B Recombinant “prevents aggravation and complications in patients reaching that stage that ultimately can result in death,” Cuban biotech expert Luis Herrera Martinez said, according to a recent Yale University Press Blog feature written by the University of Glasgow’s Helen Yaffe. She called the treatment a potential “wonder drug” against the new coronavirus.

Yaffe, who recently authored a book on Cuba’s post-Soviet economic experience entitled We Are Cuba!, told Newsweek that she knew of at least 15 countries that have contacted Cuba to request the drug, along with “local mayors and hospital directors who are anxious to get hold of the Cuban anti-viral to meet the crisis.” Interferon Alpha-2B Recombinant has not been approved to treat COVID-19, but has been proven effective against viruses similar to it.

It has been selected along with 30 other drugs to treat COVID-19 by China’s National Health Commission. The World Health Organization will be studying interferon-beta, along with three other drugs, to determine their effectiveness against the new coronavirus.

Cuba’s ambitious anti-pandemic efforts are hindered, however, by decades-long U.S. sanctions that one Cuban official described to Newsweek as “the main obstacle not only to respond to major health crises like COVID-19, but the main obstacle to the country’s development at any area.”

“The lifting of the blockade against Cuba would have an extraordinarily positive impact on Cuba and mostly in the health sector, which has been one of the most damaged areas since the establishment of the blockade almost 60 years ago with more than 3 billion in economic losses,” the official added.

The State Department has said it would offer assistance to sanctioned countries facing this new coronavirus, repeatedly mentioning Iran and North Korea but not Cuba in recent statements. Secretary of State Mike Pompeo did, however, single out the country along with several others earlier this month while discussing the annual Country Reports on Human Rights Practices that targeted Cuba over its single-party system, imprisonment of political prisoners and other abuses reported by the U.S.

“The root of the U.S. sanctions is the reality that the Castro regime uses its financial resources to abuse the Cuban people and engage in malign influence around the region, especially in Venezuela. That basic reality needs to change before any scaling back of sanctions could be discussed,” a State Department spokesperson told Newsweek.

“Furthermore, the U.S. State Department has documented indicators of human trafficking in Cuba’s overseas medical missions each year since the 2010 Trafficking in Persons (TIP) Report, including, most recently, those included in the 2019 TIP Report,” the spokesperson added. “We urge host country governments to examine the practices surrounding these programs and proactively investigate the contractual agreements associated with Cuba’s medical missions in their countries.”

The Cuban Foreign Ministry regularly rejects such accusations, arguing that Washington’s embargo was instead the true violation of international law and highlighting Havana’s humanitarian contributions.

“Despite the blockade, Cuban doctors are working in 59 countries around the world, 37 of which have confirmed cases of COVID-19,” the Cuban official told Newsweek.

These countries include Latin American and Caribbean countries such as Grenada, Jamaica, Nicaragua, Suriname and Venezuela but also Italy, which has witnessed the deadliest COVID-19 outbreak to date. The disease has no veritable vaccine or cure yet, but Havana hoped to demonstrate its ability to at least alleviate health crises on an international scale.

“In addition, the world can count on more than 29,000 doctors who graduated in Cuba and who, following their training at the Latin American School of Medicine and other Cuban faculties, will do everything in their power to combat COVID-19,” the official said.

At home, Cuba’s experience with COVID-19 has been relatively mild. The country of roughly 11.5 million people has so far registered 40 cases and a single death as of Tuesday, according to the Cuban Ministry of Public Health.

The Cuban health sector is highly developed, a priority of Fidel Castro’s mid-20th century revolution that placed the island in the spotlight of Cold War geopolitics. “Health is an issue of utmost importance for Cuba, which is why we defend the right of all human beings to receive quality medical care,” the Cuban Foreign Ministry said in a statement sent to Newsweek. “Therefore, solidarity is a principle defended by Cuba and our people during more than 60 years of Revolution.”

Yaffe explained to Newsweek how “a small, Caribbean island, underdeveloped by centuries of colonialism and imperialism, and subject to punitive, extraterritorial sanctions by the United States for 60 years, have so much to offer the world.”

“After the Revolution of 1959, Cuba’s socialist state developed a free, universal healthcare system, attaining more doctors per person than any other country in the world. This has been facilitated by free, universal access to education at all levels,” she said. “The benefits are distributed globally; some 400,000 Cuban medical professionals have worked overseas in six decades, mainly in poor countries, providing healthcare that is free at the point of delivery.”

Before embarking abroad on what’s known officially as “collaboration missions,” 400 Cuban doctors and specialists are preparing for their missions by training at the Pedro Kouri National Institute of Tropical Medicine, according to the Cuban Foreign Ministry. The Havana-based institute has been designated a health center for treating confirmed COVID-19 cases, though there were few so far at home.

The U.S., on the other hand, is set to become the country most afflicted by the coronavirus. COVID-19 cases in New York State alone exceeded 20,000 on Tuesday, with new cases said to be doubling at a rate of every three days. The U.S. has reported 46,158 confirmed cases, 583 of whom died and 35 of whom have recovered as of Tuesday.

That same day, the Navy announced that a sailor tested positive for COVID-19 while stationed at Guantanamo Bay, the U.S. military base and prison facility maintained without permission on Cuban territory.

President Donald Trump’s administration has sought help from the international community to battle the disease. State Department officials have reportedly called on foreign aid recipients to provide critical medical supplies, and the president himself appealed to his South Korean counterpart for ventilators, according to a readout of their 23-minute call released Tuesday by the Blue House.

Washington has previously rejected Havana’s offers to assist during national emergencies such as Hurricane Katrina, which devastated the city of New Orleans and surrounding areas in 2005. The Cuban official told Newsweek that, as of Monday, “no official request for help has been received” from the U.S. amid the current crisis.

Nor were there any signs of sanctions relief despite urgent pleas Tuesday from top United Nations officials.

U.N. Secretary-General António Guterres called for a global ceasefire as well as the removal of all international trade barriers and restrictions in order to jointly curb the rapid spread of COVID-19. U.N. Human Rights High Commissioner Michelle Bachelet called specifically for sanctions to be lifted against Cuba, North Korea, Zimbabwe and Venezuela.

“The majority of these states have frail or weak health systems. Progress in upholding human rights is essential to improve those systems—but obstacles to the import of vital medical supplies, including over-compliance with sanctions by banks, will create long-lasting harm to vulnerable communities,” Bachelet’s statement read. “The populations in these countries are in no way responsible for the policies being targeted by sanctions, and to varying degrees have already been living in a precarious situation for prolonged periods.”

Following a burgeoning detente under the administration of former President Barack Obama in 2015, Trump has expanded economic restrictions against Cuba. Washington has long sought regime change in Havana but now struggled to oust another leftist, U.S.-blacklisted government in Caracas, where embattled Venezuelan President Nicolás Maduro continues to receive support from Cuban officials in spite of Trump’s tightening sanctions on both countries since 2017.

“In the months prior to the COVID-19 pandemic, Cubans were already experiencing shortages of oil and basic goods, like soaps and foodstuffs, because of the tightening of the U.S. blockade,” Yaffe told Newsweek. “They were also suffering from scarcities of some of the inputs required for their world-leading biotech industry.”

“This is despite the fact that almost every country in the world condemns the U.S. (unilateral and extra-territorial) blockade, evidenced by the U.N. General Assembly vote for 28 consecutive years,” she added. “Now is the time to demand an end to sanctions that stop Cuba from getting access to the resources it needs to fight this deadly pandemic, both for their own population and for the global beneficiaries of Cuban medical internationalism.”